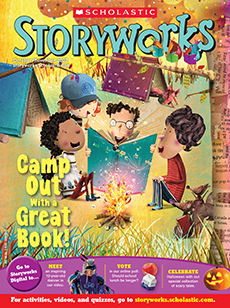 Cassie’s new school is filled with mean kids. Or is something else going on?

Students will analyze the problem and solution in a story about a girl who is figuring out how to make friends at her new school.

UP CLOSE: Problem and Solution

As you read, look for the problem Cassie faces and how she solves it.

Cassie takes a bite of her turkey sandwich and wonders why all cafeterias smell the same, like wet paper towels, spaghetti sauce, and the kind of smushy white bread you can roll into little balls and throw at your brother. It’s not a bad smell—in fact, when your family moves a lot, it’s nice to walk into your new school’s cafeteria and discover it smells exactly like your old school’s cafeteria. Still, it’s sort of weird.

“Cassie, you’re not listening to me,” her cousin Megan complains from across the table. “Are you signing up for gymnastics or not?”

“I told you about the girls who play soccer, remember?” Megan says. “They don’t talk to people like us.”

“Because we live on the east side of the highway?”

“That, and the fact we live in regular houses instead of humongous mansions like they do.” Megan shakes her head. “You’ve only lived here for two weeks. I’ve lived here for two years. Believe me, at this school, where you live matters. A lot.”

Cassie looks around the cafeteria. Is everyone at school as awful as Megan keeps saying? Two tables over, a group of boys are running around a table, laughing and shouting. They remind her of golden retrievers, with their cheerful, dopey looks, and the way they barely notice what—or who—they’re knocking into.

This is one of Cassie’s favorite games—comparing people to dogs. So who else? Her eyes move around the cafeteria. A group of girls in the back yap at each other in high-pitched voices. Terriers, she thinks. She sees their art teacher standing by the exit, watching over the commotion like she’s just waiting to send someone to the office. Definitely a German shepherd.

And those soccer girls sitting at the table up front? If they’re as mean as Megan says, they’d be Rottweilers—or maybe pit bulls.

Megan was right, Cassie decides. She should stay away.

Glancing at her cousin, Cassie guesses she and Megan are a couple of mutts. Maybe that would explain why they sit by themselves at lunch and don’t play basketball or tell jokes with the other kids at recess. Maybe in this school, you have to be the right kind of dog to fit in.

To Cassie’s surprise, Jessica stops at their table and smiles. “I liked what you said in language arts today, Cassie. I wish we could read more funny books too.”

“I love books about dogs,” Jessica says. “In fact, I love everything about dogs.”

Cassie stares at Jessica for a second and then breaks into a smile. “Me too.”

“Cassie’s with me,” Megan snaps, and then quickly looks down. “We’re cousins.”

“Are you sure she’s a terrible person?” Cassie asks as she watches Jessica head back toward her friends.

“Believe me, she’s awful.” Megan stuffs her lunch leftovers into her bag and stands to leave. “I should know.”

Then she’s a pretty good actor, Cassie thinks as she follows her cousin out of the cafeteria. She looks over at Jessica’s table. One of the girls has a shoe on her head, the laces tied under her chin. Everyone is laughing. Cassie starts to laugh too but stops herself. Megan’s not just her cousin, after all; she’s Cassie’s best friend. No matter what, Cassie’s on her side.

Over the next week, Cassie steers clear of Jessica and her friends. She’s totally Team Megan. But she’s starting to notice some things, like the way nobody ever says hi to Megan when they’re walking down the hall. What’s really odd is how people move away from her, like they’re afraid of getting bit.

Or is Megan the one moving away? She’s a different person at school, that’s for sure, not at all like the loud, funny girl she is at home. She’s always hiding behind something—a book, her hair. Sometimes Megan reminds Cassie of a sheepdog, the way she lets her bangs fall over her eyes like a shield.

Every day, Cassie feels a little more confused. Nothing makes sense at this school.

One afternoon, Cassie’s outside walking Bandit, her curly-haired Labradoodle, thinking about the book report she has to write. Suddenly, Bandit stops short, and Cassie almost trips over him.

“Come on, buddy,” she says, giving the leash a tug, but Bandit refuses to budge. Halfway down the block, she sees her neighbor Mr. Dennis. He’s walking his dog, a tiny, very old poodle who sort of looks like him. Or is it the other way around?

As they get a little closer, Bandit lowers his head. He growls a little.

But Bandit’s not listening. Ever since he got bitten on the nose last year by a tiny Maltese, he’s suspicious of every dog he sees. Cassie’s tried to explain to him that the Maltese felt threatened and was acting in self-defense, but there’s no way to make Bandit understand.

Cassie waves at Mr. Dennis and pulls Bandit over to the other side of the street.

Bandit sniffs at a clump of weeds, like he’s not interested in talking about it anymore. There’s something about him—his fur hanging over his eyes, his hunched shoulders, his scared look. Who does he remind her of?

And then it hits her.

Cassie quickly leads Bandit back to their house. She finds her mom working in her office.

“Do you think something happened to Megan when she first moved here? Something at school?”

Her mom looks up from her computer. “Maybe? I remember hearing there was something with one of the girls, but I don’t know the details.”

Cassie thinks about this as she walks back to the kitchen. Was that girl Jessica? Is she really a vicious pit bull? Does everyone at school really judge kids who live in the wrong kinds of houses?

Cassie grabs a chocolate chip cookie from a plate on the counter. Whatever happened to Megan, there’s nothing Cassie can do about it. And things could be worse. She might not have any friends at her new school, but at least she has Megan, and Megan has her.

Cassie leans down to scratch Bandit behind his ears. “Just like you have me.”

Something in her dog’s big brown eyes makes her feel sad. She remembers how he used to love to play with other dogs. It must feel terrible now, to be afraid all the time.

“You’d like to have a few more friends, wouldn’t you, buddy?” she asks Bandit.

Bandit gives her a look that seems to say, How can you tell?

Right then Cassie decides she’s going to help Bandit get over his fear of Mr. Dennis’s little poodle. She’ll figure out a way.

Cassie has an idea about that too.

“I  invited someone to eat lunch with us,” Cassie tells Megan the next day. “I’m starting a book club for dog lovers, and I want you to be a member.

Cassie pretends not to hear. “I brought chocolate chip cookies,” she says as she sits down. She pushes the container of cookies toward Jessica. “Why don’t you both have a few?”

Megan eyeballs the cookies. Cassie knows that her aunt Bethany is super strict about sweets and that Megan probably hasn’t had a cookie in weeks.

“I’ll eat one cookie and then I’m leaving,” Megan says, holding out
her hand.

Cassie gives her two. “So, who here loves dogs?”

“So we all have something in common,” Cassie says, smiling at both girls.

“Except that some of us are terrible people,” Megan mutters, biting into her cookie.

“What?” Cassie’s not sure if she’s heard Megan right.

“She said that I’m mean,” Jessica says, reaching over to take a cookie. “Except that I’m not. She is.”

“You never talk to anyone. You act totally stuck-up.”

“Remember your birthday party last year?” Megan asks, her cheeks turning bright red. “How you invited all the girls in our class except for me?”

“Because you spit on me!”

“It was an accident! I ate this disgusting mint and was trying to spit it out the bus window, but the spit got blown to the seat behind me instead!”

“And hit me in the face!” Jessica adds. “Which was totally gross, and you never even said you were sorry.”

Megan reddens again. “I did too say I was sorry,” she says, but she sounds a little unsure.

“Well, I didn’t hear you. And then you just stopped talking to people.”

“I was embarrassed. But I was sorry.”

Jessica stares at the cookie in her hand and then looks at Megan. “And I’m sorry about the party. I felt really bad about it later.”

They sit there for a moment.

Megan pushes her hair out of her eyes and smiles at Jessica. Cassie’s heart lifts up.

“This is great, you guys,” Cassie says, holding out her container of cookies. “Have another treat!”

Which is when they all start laughing. They laugh so hard they have a hard time stopping. When they finally quiet down, Jessica says, “We could ask some of my friends if they want to join our club.”

If we were dogs, Cassie thinks, we’d all be wagging our tails.

But instead they sit there, smiling and eating their cookies.

Which is almost as good.

Write a letter from Megan to Cassie, in which Megan explains why she avoided other kids and thanks Cassie for helping her change.

"Dog People" tells the story of a girl who is figuring out where she fits within her new school’s social structure. Eventually, she forges connections for herself and others through a shared love of dogs. Issues of miscommunication and wrong impressions are explored.

The story is told from the main character’s point of view and is chronological.

The story features a central metaphor of how people are like dogs and includes some figurative language and idioms.

Students are expected to be familiar with several common dog breeds, such as golden retriever, German Shepherd, and pit bull. Students will need to make several inferences to fully understand the story.

To help students understand the dog metaphors in this story, ask them to mark each passage with a dog/human comparison. Discuss what each breed mentioned is like, and how humans could have similar traits. With students, research dog breeds as needed to aid comprehension.

Have students practice using metaphors, inspired by Cassie’s comparison game. Students should think of another category they could compare people to (e.g., vehicles, songs, birds), then write descriptions of three people they like, using metaphors they create from the category.

Our March/April 2018 fiction feature makes a great pairing with this story. “Squeak Twice for Yes” is another dog-centered tale of how a character learns to overcome her fears. Ask students to compare Brian and Ophelia’s experiences with Cassie and Megan’s. What role do dogs play in each story?