We’ll send you updates on new digital features and tips here throughout the year. Check out Storyworks At Home for our favorite stories and tools to kick off your year.
Explore
Dismiss 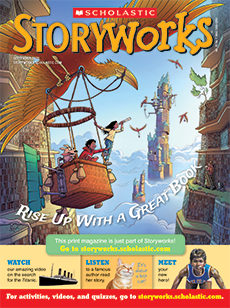 In this funny and touching story, two science fair partners strive for first place but get something better.

As you read, look for how some unexpected events in the story solve a problem in a surprising way.

The night I discovered Sherlock could talk was just a regular night.

Mom was rushing around the kitchen, trying to figure out what to do with the pork chops Dad had forgotten to take out of the freezer.

“Brian,” Mom cried. “Would you please call your dog? He’s driving me crazy with his squeaky toy!”

Sherlock stood in front of her, squeaking his stuffed monkey over and over.

“Come here, Sherlock,” I said. Sherlock bounded over, wagging his tail. He looked up at me with those big brown eyes. Most of the time his eyes were happy. This time his eyes said, “Listen up!”

“Are you trying to tell me something?”

“Hey, Dad,” I said. “I think Sherlock is trying to talk to us through Mr. Squeaks.”  Sherlock squeaked the monkey twice.

“He’s trying to tell you he wants his dinner,” Mom called from the kitchen.

Sherlock yipped at the sound of his favorite word: dinner.

“Is that what you want, Sherlock?” I asked.  “Squeak twice for yes if you want dinner.”

Sherlock picked up the slobbery monkey and squeaked it twice.

“Brian, just feed that poor dog. And honey, call Speedy’s Pizza,” Mom said as she slumped down on the couch.

I filled Sherlock’s dish with food.

“You want your dinner, boy?” I asked. Squeak! Squeak!

I decided to try something else. “Do you want to go to the vet, Sherlock? Squeak twice for yes and once for no.”

Sherlock bit down once on Mr. Squeaks. Hard.

They were too busy arguing over pizza toppings to notice.

The next day at school, I found Ophelia in the library. She was easy to spot because she wears the same clothes every day—jeans, a T-shirt that says “It’s All Relative,” and a purple cap with “Doctor Who Rules” stitched on it. The kids in fifth grade think she’s weird. I happen to know she’s a genius. That’s why I was lucky to get her as my science fair partner. With her brains, I actually had a chance of going to the Missouri State Championship in St. Louis. The winners would get tickets to Six Flags amusement park, which had just opened the Super Anti-Gravity Coaster. I wanted to ride it more than anything.

She glared at me over the rim of her glasses. I’m pretty sure I’m the only one who can call her Phee without getting socked in the stomach. “Of course,” she said. “Our presentation is in five days.”

“Cool!” I held my hand up for an automatic high five. Ophelia rolled her eyes. Ophelia does not do high fives.

Later that day, we sat cross-legged on my bedroom floor, going over our presentation on Morse code. Ophelia studied her checklist as she tapped her pencil on the side of her glasses.

“First, you’ll tell them how Samuel Morse and some others invented this method of communicating in 1836. Then, using this Morse code alphabet chart I made, you’ll explain how each letter and number is represented by a unique sequence of dots and dashes or clicks. And don’t forget—”

Sherlock trotted into my room holding Mr. Squeaks in his mouth.

“Watch this, Phee. Sherlock, squeak twice for a dog cookie.”

We ran through our yes-for-dinner and no-for-the-vet routine. “Interesting but irrelevant,” Ophelia said.

“See, he’s using Morse code,” I said, half joking and half not.

Ophelia rolled her eyes. “Right. How would a dog learn Morse code?”

“Why not?” I said. “On Animal Planet they said chimpanzees, dolphins, and even dogs have been taught to ‘read’ symbols for words.” Picking up steam, I said, “He’s been in the room with us while we’ve been working on this project. It makes total sense!”

I paced around my bedroom. “Phee, do you know what this means?” I grabbed Sherlock by his furry front paws and danced him around the room. “There’s no way we can lose now with Sherlock.”

Ophelia stuffed her notepad into her Albert Einstein backpack. “The only way we’ll win is by hard work, not with a trick dog!”

“No buts, Brian. I’ve worked hard on the research and graphs and posters. All I need you to do is give the oral presentation.”

I touched her trembling arm. “Don’t worry. I have it covered.”

I wrote down the pattern of his squeaks then looked up at the chart.

“I’ve got it!” I crowed. “You said, ‘One smart boy,’ didn’t you?” Sherlock squeaked his monkey twice.

I laughed and rolled on the floor with my dog. “Six Flags, here I come!”

The day of the science fair arrived. Ophelia had the charts and posters. All I had to bring was Sherlock. And Mr. Squeaks.

“I told you. He’s part of the presentation,” I said with a grin.

I found Ophelia setting up our table in the packed gymnasium. I hardly recognized her: She had on a dress and no Doctor Who cap.

“Don’t say a word,” she said, her face turning as red as Mr. Squeaks’s cape. “And what’s he doing here?” she demanded, pointing at Sherlock.

Before I had a chance to argue with her again, Principal Meeks announced the beginning of the contest.

“I’ve been working with Sherlock all week,” I assured her. “He can say ‘Hello, my name is Sherlock’ in Morse code.”

“That’s not what I meant,” she hissed.

The judges, teachers, parents, and students arrived at our table. There must have been 30 people. Ophelia whimpered behind me.

“Ah, and what would a science fair be without a Morse code project,” Mr. Dent, the English teacher, sighed.

I smiled. “My partner and I have a very different presentation. We’ve taught my dog to communicate using Morse code.”

“Let me introduce him.” I looked behind me. No Sherlock.

“He was here just a minute ago,” I said.

“Sherlock, where are you, boy?” I called.

A faint squeak came from under the table. I lifted the tablecloth. Sherlock was hiding with Mr. Squeaks.

I pulled him out and set him on the table beside the poster of the Morse code alphabet. “Meet Sherlock, the talking dog,” I said. He looked as terrified as Ophelia.

I explained how I’d taught him to talk using different squeaks for dots and dashes. I handed Sherlock his monkey. Someone in the back laughed.

“Sherlock, why don’t you introduce yourself?” He stared out at the crowd, frozen. Mr. Squeaks shook in Sherlock’s mouth.

“What’s the matter? Cat got his tongue?” someone called. Everyone laughed.

Sherlock squealed with fright and leapt off the table, knocking Ophelia’s charts to the floor. The crowd scattered as he flew across the gym toward the doors.

Ophelia clutched a sheet of paper, her hands shaking but her face determined. “I’ll take over. Go find him.”

I almost melted in gratitude. “Thanks, Phee,” I said as I dashed away.

Mom and Dad scoured the hallways with me and called Sherlock’s name.

No Sherlock. I felt sicker than sick.

Mom put her arm around me. “I’m sorry about the project, honey. I know how much you wanted to win.”

Tears stung my eyes. “I don’t care about winning the stupid science fair. I just want to find Sherlock.”

But Sherlock was nowhere to be found. “We’ll look out in the parking lot,” Mom said. “You go help Ophelia.”

When I spotted Ophelia with all our stuff packed up, I felt even more terrible.

“I’m really sorry, Ophelia,” I said miserably. “I ruined everything.”

She turned around, grinning!

“Sherlock!” I cried. I took my dog from her arms.

“He came back here while you were looking for him,” she said.

I hugged him. “You were right all along, Phee,” I said. “It was stupid to think he could talk. I guess sometimes a squeak is just a squeak.”

She ruffled Sherlock’s ears. “It’s OK. If he hadn’t run away, I’d never have found the courage to actually talk in front of people. That’s worth more than any first-place medal.”

Sherlock yipped and wagged his tail. I put him on the floor. He grabbed his monkey and squeaked it for all he was worth.

Sherlock pawed Ophelia’s leg and squeaked the same pattern again. Ophelia grabbed a pen and scribbled something down.

Her eyes grew huge, and then she laughed.

She turned the pad so I could read it:

We laughed. Ophelia held up her hand, and we slapped the best high
five ever.

“You ready to go home, Sherlock?”

“Squeak Twice for Yes” is about two fifth-graders’ preparations for a science fair presentation on Morse code. In the course of the story, Ophelia overcomes her fear of public speaking and Brian realizes that some things are more important than winning.

The story is told in the first person and is chronological.

The language is mainly conversational and includes a good deal of dialogue.

The text includes a few idioms. It also mentions Doctor Who and Six Flags amusement park.

Ask a volunteer to read aloud the Up Close box on page 11.

Pause periodically while reading the story and ask “What just happened?” Have students respond on sticky notes, which they can place in the magazine next to the action described. Reviewing the series of notes will help students better understand the story’s plot.

Ask students to imagine how the story might have been different if Sherlock had not run away during the science fair. Then have them work alone or in pairs to write alternate endings.

The story is rich in past-tense action verbs. Help your ELLs get a handle on bounded, yipped, slumped, glared, socked, sniffed, whimpered, squealed, dashed, and ruffled by displaying the words and discussing their meanings. Students should take turns acting out a word while others guess it, saying “She yipped,” “He slumped,” etc.

Instruct groups to reread the story, pausing after each scene with Sherlock. At each of these points, the group should work together to create a short blog post from Sherlock’s perspective to describe what just happened in the story. Students can use these posts to help them with the writing prompt