In just 20 minutes, this video will walk you through everything you need to know about using Storyworks, including our favorite hidden gems.
Explore
Dismiss 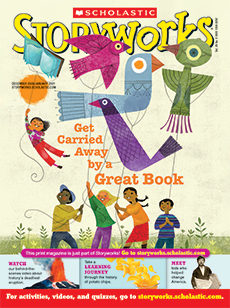 Fiction Teaser: Dusti Bowling's "The Mystery of the Cactus Arm"

By the Editors of Storyworks

Dusti Bowling's newest critically-acclaimed book "The Canyon's Edge" hit shelves this past Tuesday. (If you haven't already, we highly recomend you grab a copy!) To celebrate, we here at Storyworks wanted to share with you an exerpt from the thrilling story she wrote for our upcoming October/November issue. It's called "The Mystery of the Cactus Arm," and it's about a boy named Oliver who faces unexpected—and spooky—consequences after taking a dare. Keep reading to get a taste of Dusti's gripping story!

I stand under the saguaro cactus in my front yard with my next-door neighbor, Calvin. The cactus towers over us, at least five times our height. Its trunk-like body and large curving arms reach for the cloudless Arizona sky.

“Oliver,” Calvin says. “I bet five dollars you can’t make that arm fall off.” He’s always betting me like this. Last week he bet five dollars I couldn’t catch a tarantula hawk, which is a nasty wasp. I ended up with the most painful sting of my life. But that was still better than having to deal with Calvin making fun of me at school if I’d chickened out.

A wooden support beam is wedged under one of the saguaro’s arms. My parents put it there to hold the arm up after a tree branch fell on it, causing it to nearly break off. I push on the beam, but it’s pretty stuck. “I don’t know,” I say, kicking at it lightly. “My parents are trying to save it.”

Calvin narrows his eyes and grins. “I’ll bet you 10 dollars.”

I’m tempted. I could put the money toward the new video game I’ve been wanting—Animal Crossing. But it’s still a bad idea. “Nah,” I say. “My parents might get mad.”

Calvin rolls his eyes. “You’re such a chicken.”

Here he goes again with his taunting. Why did that guy have to live next door to me?

I lean on the beam a little. “I don’t think so,” I say, but I’m sure Calvin senses he’s wearing me down.

“Fine,” he says. “Fifteen dollars. That’s all the money I have.”

Whoa. He’s never bet me that much before. Fifteen dollars would definitely be enough to buy Animal Crossing, and maybe Calvin would finally leave me alone once and for all.

I kick a little harder at the beam. It budges. I know I shouldn’t do it, but that arm is on its way out anyway. How long could it possibly hold on? “Deal,” I say.

I glance back at my house to make sure no one’s watching and kick at the beam as hard as I can. It moves about an inch. My toes sting, but I keep kicking it. The beam eventually clatters to the ground in a cloud of dust, forcing us to jump out of its way.

The saguaro arm sways and sags, but it doesn’t fall. Calvin pumps his fist. “You lose!”

“Not so fast,” I say, picking up a large rock. I chuck it at the arm. It bounces off, and the arm sways again. I start grabbing every rock I find and hurling them at the arm. It begins to tilt, finally twisting and tearing off at the joint, plummeting to the ground in another puff of dust.

“Yes!” I shout. There won’t be any teasing at school tomorrow, and with all of Calvin’s money gone, maybe not ever.

Calvin is pale despite the blazing heat. “I can’t believe it,” he mutters.

“What’s going on out here?” We whirl around and see Dad coming toward us. “Oh no,” he says. “That arm broke off.” He looks down at us suspiciously. “How’d that happen, Oliver?”

I shrug, my shoulders shaking a little. “I don’t know.”

“It was like this when we got here,” Calvin adds. We glance at each other nervously.

Dad shakes his head. “Bummer,” he says. “You know it takes a hundred years for a saguaro cactus to even grow an arm? What a loss.”

I blink at him in the bright sun. No, I hadn’t known that.

Dad shrugs. “Oh well. Nothing to be done about it now. Will you boys help me wrap it up and carry it to the Dumpster?”

We help Dad roll the arm up in an old piece of carpet and carry it across the yard. As we toss it into the Dumpster, Dad says, “Just think—a hundred years down the toilet.”

Dad smiles, but I don’t feel like smiling at all anymore. After Dad goes back into the house, Calvin grumbles, “I’ll bring you your money tomorrow.” Then he turns and leaves.

I watch him walk next door, the guilt already building in my chest over what I did to that cactus. And over how I’d lied to Dad.

I toss and turn in my bed that night, thinking about the cactus and Dad’s disappointed face.

A hundred years down the Dumpster.

A light flashes into my room, and several seconds later thunder booms. I start counting the seconds between the flashes and booms. There are fewer seconds every time. The storm is moving closer.

After another blinding burst of light, I count, “One Mississippi, two Mississippi—”

I stop. Did I hear something? It sounded like whispering.

The thundering boom comes, and I think I hear whispering again.

Is that what it’s saying? That can’t be right. I don’t even know anyone named Jack Hut.

I strain to hear the words. It’s getting easier to make them out between the booms because the whispering is getting louder, just like the thunder. My heart nearly stops as I figure it out.

Who stole my cactus arm?

I pull the covers up to my trembling chin. Then I let out a big sigh of relief, the realization hitting me—it’s Calvin. He’s pranking me. It’s just like him to do something like this. What a sore loser.

I throw the covers back down and jump out of bed. Running to the window, I shout, “I know you’re out there, Calvin! I’m not letting you off the hook for the money!”

The whispering gets even louder.

Who stole my cactus arm?

Lightning flashes, revealing the yard outside my window. I run back to my bed, my heart leaping in my chest, the thunder rattling the window. I pull the covers up over my head.

Want to know how the story ends? Read "The Mystery of the Cactus Arm" in the October/November 2020 issue of Storyworks.

This Webinar Will Help You Get the Most Out of Storyworks This Spring!

The Storyworks Ideabook is for teachers looking for awesome ideas on all things ELA. It’s where you’ll find fresh, creative, practical ways to use the phenomenal resources available to you through this award-winning magazine.

Stay in the Loop

Our newsletter brings the latest from Storyworks right to your inbox.