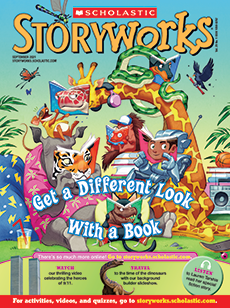 Learning Objective: Students will explore the theme of courage in a historical-fiction play.

Editor’s Note: This is an edited version of a play that originally appeared in the February 2017 issue of Storyworks. We updated the play to meet our current standards for teaching sensitive issues like racial discrimination and to make sure students aren’t put in a position to play problematic characters.

One big idea in this play is that it takes courage to make changes. As you read, look for how Ruby had courage.

Choose the character you will play. *Starred characters have large speaking roles.

Marshals 1 and 2: men who protect Ruby

Historian 1: Our play takes place in New Orleans, Louisiana, in 1960.

Historian 2: Throughout the South at that time, Black people were kept separate from White people.

H2: This was unfair because the White schools had better conditions. They had more teachers, bigger classrooms, and newer supplies.

H1: Some people wanted children of all races to go to school together. They thought the schools should be integrated.

H2: But many White parents wanted things to stay the same. They planned to protest at White schools to stop Black students from entering.

H1: In this fight for fairness, one brave girl led the way.

Ruby with her parents, Abon and Lucille Bridges. Ruby’s dad was worried about sending her to an all-White school, but her mom convinced him it would be an important step forward—not just for Ruby, but for all Black children.

Narrator 1: Ruby is in the small bedroom she shares with her younger siblings.

Michael: You always get to be the teacher.

Narrator 2: Ruby finds a scrap of paper and the stub of a pencil. She writes the alphabet.

Ruby: I’ll point to a letter, and you tell me what it is.

N1: There is a knock at the front door. Ruby’s parents answer.

Sheila: Hello, I’m Sheila. I’d like to talk to you about Ruby.

Mr. Bridges: Is something wrong?

Sheila: Not at all. This past spring, Ruby was one of more than 100 Black kindergartners to take a placement test.

Sheila: Only six students passed that test. Ruby was one of them.

Mr. Bridges: What does that mean?

Sheila: She can attend first grade at William Frantz Elementary, which is a better school and closer to your home.

Mr. Bridges: Isn’t that the White school? Those folks don’t want us there.

Sheila: Sir, a judge has ruled that keeping Black children in separate schools is illegal. They deserve the same rights as White children.

Mr. Bridges: I heard the governor on the news. He said he’d go to jail before he’d allow Black kids in a White school.

Sheila: He may feel that way, but school segregation is ending. And your daughter could be one of the first Black children to help that happen.

Mr. Bridges: There will be a lot of angry people outside that school. You want my little girl to walk past a shouting mob just to get to class?

Sheila: Sir, we can only get rid of discrimination if there are people willing to stand up for what’s right.

Mr. Bridges: It’s one thing to ask me to fight for equal rights, but Ruby is only 6 years old!

Sheila: We will make sure nothing happens to her.

Mrs. Bridges: We’ll talk it over and let you know.

Sheila: Just think of it—Ruby would be a hero for Black children throughout the South.

Ruby: Why are you in your work clothes?

Mrs. Bridges: I’ve got a job tonight. While you are sleeping, I’ll be cleaning that big hotel downtown.

Ruby: I wish you didn’t have to go.

Mrs. Bridges: Me too, sweetie, me too.

N1: Mrs. Bridges turns out the light and joins Mr. Bridges in the kitchen.

Mrs. Bridges: I can’t stop thinking about that William Frantz Elementary. It sure looks nice—big and clean.

Mr. Bridges: I don’t think we should send Ruby to a school where she’s not wanted.

Mrs. Bridges: The school she’s at now is crumbling. The kids are crammed in dirty rooms. There aren’t enough desks. The books are falling apart.

Mr. Bridges: You think having shiny new books is going to change her life?

Mrs. Bridges: A better education will lead to better jobs.

Mrs. Bridges: Remember where I was the day before Ruby was born? I was in the fields with a 90-pound bag of cotton on my back.

Mr. Bridges: No one ever promised us an easy life.

N1: One Sunday night that fall, Mrs. Bridges has news for Ruby.

Ruby: What about my friends?

N2: In the morning, Mrs. Bridges ties a pretty bow in Ruby’s hair.

Mrs. Bridges: Are you ready?

N1: Ruby nervously tugs at the stiff collar of her dress.

Mrs. Bridges: Now, Ruby, there might be a lot of people outside the school, but you don’t need to be afraid. I’ll be with you.

N2: There is a knock at the door. The Bridges are surprised to see four White men in suits and yellow armbands. Ruby hides behind her father.

Marshal 1: We are here to take Ruby to school, sir.

Mr. Bridges: Where is Sheila?

Marshal 2: We’re U.S. Marshals. The judge thought it would be safer if we protected your daughter.

Mr. Bridges: What if the crowd tries to hurt her? It’s not too late to change our minds.

N2: Mrs. Bridges has a pained look on her face.

Marshal 1: We will stay with Ruby all day, ma’am. We will keep her safe.

Ruby marching down the school steps with U.S. Marshals. Her courage made news around the country, inspiring hundreds of Americans to send her encouraging letters, toys, books, and clothes

N1: The marshal who is driving grips the steering wheel tightly.

Marshal 2: Mrs. Bridges, let us get out of the car first, then you go. We will surround you and your daughter.

Marshal 1: We want you to look straight ahead and not turn back.

Mrs. Bridges: You got that, Ruby?

Ruby: Yes, Mama. Look straight ahead and not back.

N1: They pull up in front of the school. There are policemen everywhere.

N2: A huge crowd is gathered behind barricades.

Ruby: Why are those people waving and shouting? Is this a parade?

Mrs. Bridges: No, sweetie. It’s not a parade.

N1: When they step out of the car, the shouts grow even louder.

N2: The crowd is yelling at Ruby to go home.

N1: Ruby walks between the marshals. Her eyes point straight ahead.

N2: As Ruby enters the school, a White parent sees her and gasps.

N1: The parent storms out the door, holding her son by the wrist.

N2: Other White parents stream through the halls and take their children home.

N1: They do not want their children in school with a Black child.

Angry crowds gathered outside the school each day to protest Ruby’s arrival. They also taunted the few White parents who continued sending their children to school, like Daisy Gabrielle (right, with her daughter Yolanda and a police protector).

N2: Ruby is brought into her classroom. There are no other kids, just a sea of empty desks and chairs.

Ruby (quietly): Are we too early?

N1: A woman comes over and greets them warmly.

Mrs. Henry: You are right on time. I’m Mrs. Henry, your teacher.

Mrs. Henry: Ruby, why don’t you sit at this desk in the front, and I’ll sit right next to you. Do you like books?

H2: At the end of that first day, the crowd outside is even larger and louder. There are reporters and cameras filming.

N1: The crowd keeps shouting at Ruby to go home and stay home.

N2: The marshals bring Ruby home. The police have set up more barricades on Ruby’s block. She and her siblings jump rope outside.

Michael: How was school?

Joana: How many friends do you have?

Ruby: None. I’m the only one in the class.

N1: Ruby stares at the policeman standing guard at the end of her street.

Ruby loved going to school with Mrs. Henry, but she was lonely for other kids. As soon as she got home, she would run outside to play with friends from her neighborhood.

H1: Ruby spends the next few months alone in class with Mrs. Henry. She is lonely.

N1: Ruby goes to sharpen her pencil and looks out the window at the empty playground.

Ruby: Where are all the kids?

Ruby: Will I ever have any friends to play with?

Mrs. Henry: Ruby, the other children will come back to school eventually.

H2: As the school year goes on, more and more White children return to school.

H1: At first, they are kept away from Ruby. But Mrs. Henry insists they spend time in her class.

Ruby: Want to draw pictures with me?

N1: The boy says he can’t. His mom doesn’t want him to play with her.

N1: After school, Ruby talks to her mother.

Ruby: All this fuss has been about the color of my skin?

N2: Ruby thinks for a moment.

Ruby: Am I really that different from White people?

Mrs. Bridges: No, sweet girl. We are all just human beings. And slowly, things are starting to change. You are helping that happen.

Mrs. Bridges: By being the smart, brave girl who marches up the steps to William Frantz Elementary every morning. You are showing the world that you deserve to be there.

Ruby: I just want to learn and have friends.

Mrs. Bridges: You will, Ruby. I promise you will.

H1: When Ruby started second grade, there were other Black students in her school.

H2: She had friends of different races.

H1: But the fight for equality continues even today.

H2: Ruby is now a grown woman with children and grandchildren of her own.

H1: She travels to schools around the country telling her story.

H2: She will never stop working to end racism and make sure that all children are given the chance to succeed.

This play has two purposes: to relate an important event in the civil rights movement, and to highlight how the courage of one girl made a change.

The play includes some terms related to the civil rights movement that might be unfamiliar, such as segregation and integration.

Some familiarity with the civil rights movement of the 1950s and 1960s will be helpful.

Assign parts and read the play aloud as a class. After reading, ask students to answer the close-reading questions in groups. Then regroup to discuss the critical-thinking questions.

Gather your struggling readers in a small group to read the play together with them. Pause at the end of each scene to review what happened. Then ask students to predict what they think will happen next.

Have students do research to find out about the Little Rock Nine, the nine African American students who integrated an Arkansas high school in 1957. Ask students to compare and contrast the Little Rock students’ experience with that of Ruby Bridges.

Be sure to use our vocabulary slideshow to introduce words and historical background that your English language learners might not know. Pause to discuss each term and what is going on in the images.

Make copies of the activities in our Core Skills Workout: theme, character, and setting. After reading the play together as a class, give students an opportunity to choose one, two, or all three of the activities to complete on their own.